This Saturday March 29th, from 8:30-9:30pm local time I’d like to extend the WWF’s (World Wide Fund for Nature) invitation to turn off your non-essential lights and electronic devices as a symbol of your commitment to our planet.  If the CN Tower, Times Square, the Las Vegas Strip, the Acropolis and the Sydney Harbour Bridge can do it, so can you.

For those of you not already familiar with Earth Hour, the event is a global environmental movement that started at a lights-off event in Australia in 2007 as part of a campaign for action on climate change.  Earth Hour has since become the world’s largest mass participation event in history with hundreds of millions of individual participants in over 7,000 towns and cities.

Obviously turning the lights out for an hour has only a small impact on the environment, but that’s not the point.  Earth Hour’s mission is three-fold: (1) to bring people together through a symbolic hour-long event; (2) to galvanise people into taking action beyond the hour; and (3) to create an interconnected global community sharing the mutual goal of creating a sustainable future for the planet.  As an avid user of electronic devices living in a huge energy suck of a city, it is my hope that participating will help promote energy awareness and appreciation while bringing together families, friends and communities during a brief reprieve from iphones, television, and stereos.

Unbeknownst to my husband, while writing this post I decided that I would host an Earth Hour party at our place.  As someone who loves candlelight and board games, I don’t anticipate having any difficulty with either atmosphere or entertainment; however, I’m expecting some debate about the necessity of powering down our smart phones.  If you’re hosting a party yourself, I recommend making some adjustments to the “first one to touch their phone buys dinner” rule. Perhaps the guilty party buys the first round post 9:30?  Drinks the King’s Cup?  Handwashes all the party dishes?  Why not make a night of it and get creative.  You won’t have photographic evidence of what goes down, so feel free to punish electronic users accordingly.

Although I like hosting (i.e. I am bossy), Earth Hour is also a really cool time to be out and about.  Although it’s almost impossible to capture an accurate “before and after” Earth Hour shot of the skyline (even if taken at the same time, the weather conditions will be such that the lighting is slightly different on any given day), but this shot, “a direct luminosity comparison” does a cool job of demonstrating just how different the city can look.  While the city of Toronto was and will be far from black, you’ll notice that the dome, the CN tower and the buildings corporate logos are all absent. 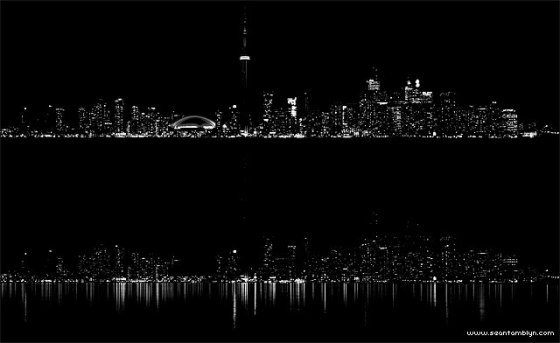 There are candlelight walks happening all over the city, including a walk along the Humber with Green 13, as well as special events, festivals and yoga classes.  Of particular note is “Switching Off and Turning On” a candlelit talk and vegan feast with travelling monk Devamrita Swami at Bhakti Lounge and a full day of free workshops and activities in Riverside, followed by an outdoor concert.